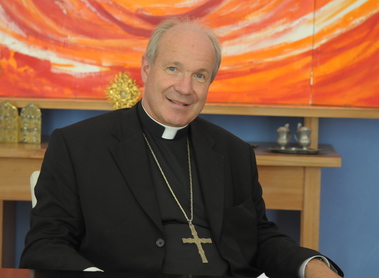 Christoph Schönborn was born in Skalken near Leitmeritz on 22nd January 1945. After his family had to flee the war, he grew up in Schruns in Vorarlberg and made his profession as a Dominican in 1964. He studied theology and philosophy in Walberberg near Bonn, Vienna and Paris, and was ordained to the priesthood by Cardinal König. Later Schönborn completed a doctorate in Paris at the Institut Catholique and in 1972/73 attended a year of studies in Regensburg, where the Pope Emeritus Benedict XVI was his teacher. Since then Schönborn belongs to the "student group" of Joseph Ratzinger which meets once a year.

From 1973-1975 he was a chaplain in Graz and from 1975-1991 he was professor of Dogmatic Theology and the Christian East at the Catholic Theological Faculty in Fribourg, Switzerland. In 1980 he became a member of the International Theological Commission of the Holy See, and in 1987 editorial secretary of the Catechism of the Catholic Church.

In 1991 Schönborn was consecrated auxiliary bishop of the Archdiocese of Vienna. Since 1995 he has been Archbishop of Vienna and as such is concurrently the metropolitan bishop of the Viennese ecclesiastical province and Ordinarius for the Byzantine Rite faithful in Austria. In 1996 he preached the Lenten retreat for Pope John Paul II and the Curia, and in the same year he received the Pallium.

Since 1998 Schönborn is a Cardinal and his Roman titular church is Gesù Divin Lavoratore. He is a member of the Congregation of the Faith, the Congregation for the Oriental Churches and of Catholic Education, the Pontifical Council for Culture and of the Council for Promoting the New Evangelization. His motto is from the Gospel of St. John (John 15:15) which says: "I have called you friends".